An historical first in France for a training restaurant

The Saisons Restaurant has become the first starred restaurant in France whose vocation is to pass on culinary know-how to younger generations. The news of this major award also confirms the excellent reputation of the establishment for its food, quality of service and the teaching offered to our students.

Davy Tissot – Meilleur Ouvrier de France 2004 – now French candidate for the prestigious Bocuse d’Or Europe award, has been running the restaurant since 2016. He contributed greatly to this recognition with his expert team and the students, future culinary and food service talents who succeed one after the other to share their vocation of excellence.

Saisons welcomes Chef Florian Pansin. After 10 years spent at the three-star Michelin restaurant Troisgros, in charge of creation and events, he joins the Institut Paul Bocuse to pass on his passion and professional values acquired from leading French gastronomy establishments to the new generations.

“By taking up this challenge in 2016, I wanted to nurture these youngsters who represent the future of French gastronomy, and offer them the experience of working in a restaurant where they actually do things for real, just like in any other Michelin-starred establishment” announced the delighted Chef Tissot.

Dominique Giraudier, CEO Institut Paul Bocuse, said he was extremely proud of the teams and the students. “For our School, after the academic recognition, this professional recognition contributes to make us unique and position us as the French reference in the hospitality and culinary arts education sector… we naturally dedicate this star to our two founders Paul Bocuse and Gérard Pélisson, who continue to inspire us in our day to day work”.

A graduate in the spotlight 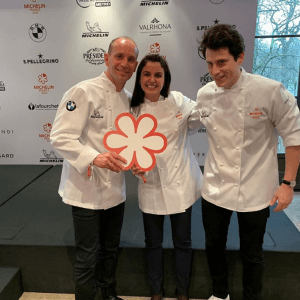